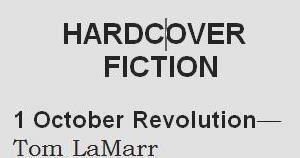 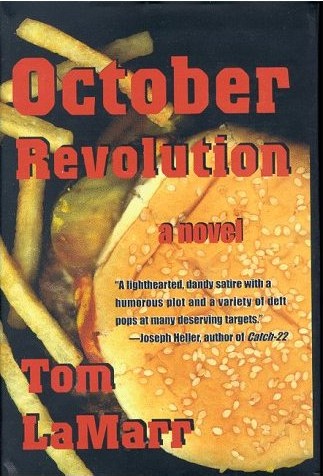 Read your novel with much ease, excitement, and pleasure. I found it "a lighthearted, dandy satire with a humorous plot and a variety of deft pops at many deserving targets."

How the publisher described it:

Sixties radical author Rod Huxley has spent the last two decades holed up in a Denver apartment with only his cats for company, hiding from the fallout of his once popular Cookbook for Revolution, written at the urging of former girlfriend and admirer Sara Caine.  With the success of Cookbook came a certain, if fleeting, celebrity status and—via the generous financial support from the unbalanced heir to a South American rubber fortune—the unpalatable realization that he was a phony.  For two decades, Huxley has withdrawn from the world, watching from a distance as society lurches along, shaking his head at its foibles.

But his self-imposed exile is not to last.  When he wrote Cookbook, little did he think it would spawn both the disastrous Iowa City Bee-In of 1973 and a mawkish guitar oratorio on the life of a “failed revolutionary.”  But less still did he imagine it would precipitate a hostage crisis of national interest twenty years later.  A terrorist is detaining a group of tourists at a Burger King in downtown Washington, DC, demanding Huxley’s presence in exchange for their release.  Soon, the FBI, led by ineffectual agent Fenwick, is knocking at Huxley’s door, ready to escort him to the nation’s capital.

Unable to tolerate his talkative companion, Huxley gives Fenwick the slip and makes his way to Washington alone, determined to face the mysterious terrorist, whose identity he can only guess at.  Who is this hostage taker, and what does he—or she—want?  As Huxley confronts the answers, he must also confront himself, his past—and his future.

Humorous fiction is conspicuously absent from the bestseller lists.… Maybe the explanation for this lack is that truly funny books, those that understand the foibles of humans without falling into mean or sarcastic diatribe, are incredibly rare. Colorado is fortunate to have an author on the very short list of writers of good humorous fiction… October Revolution is an original and slyly funny book, and it is a remarkable first novel… [His] humor is based on true affection and understanding…

Tom LaMarr is a writer who confirms his comic gifts in this wonderfully funny first novel… The turbulent past of the Vietnam generation sneaks up and bites us where it both hurts and tickles most. Readers who lived through that era will see themselves as in a funhouse mirror. But everyone should find in October Revolution an absurd and exhilarating carnival ride of comic imagination.

October Revolution is a light romp of a book that explores the identity issues of a leftover '70s revolutionary… Considering that this is Tom LaMarr's first novel, he weaves his tale with expertise and, along the way, provides the reader with enough adventurous humor and silly plot twists to keep October Revolution consistently interesting.

October Revolution comes out of left - pretty damn Left, at that – field at you, unexpected and quirky and full of wit and marinated anger and a sense of the clash of cultures, that of the Hippies and the Yuppies.  It begins and ends with the FBI taking care of Huxley’s cats out in Colorado.  But in between, Huxley – who describes himself as a former “weekend hippie communist” – is drawn back into the world of his youth by an old buddy who is holding hostages in a Washington, D.C., Burger King asking for him.  It is a comic, nostalgic, sad and somehow hopeful novel about all the things we've lost and all the things we've become and all the things we discover we can never quite abandon. October Revolution is very much a revolution worth supporting.

Thomas Gifford, author of The Assassini

Huxley's not the only person looking backward to the '60s and '70s. LaMarr has written a satirical novel in the black-comedic style of that period, reminiscent of the work of Terry Southern, Kurt Vonnegut and Joseph Heller. The surprise is that this retro form fits so easily into the late '90s. Huxley is a funny if imperfect and self-absorbed observer of the end of the 20th Century… [LaMarr has] created a wonderful voice in Rod Huxley, simultaneously quixotic, resigned and oddly optimistic. He's great company, and if this small novel doesn't save the world, it's enormous fun for as long as it lasts.

LaMarr's debut will invoke nostalgia in baby boomers no matter what their allegiances during the 1960s political wars. Well-executed flashbacks tell of [protagonist Huxley's] youthful folly, his overzealous contemporaries.

A mature reflection on the period that turned everything around. LaMarr clearly has been through it all and views it with detached humor throughout this novel of experience.

Hilarious ... The narration is consistently funny and insightful.

In this remarkable first novel, Tom LaMarr creates a loveable comic hero… It's rare and refreshing to find humor infiltrating a literary work about the Vietnam War and the peace movement. But, in one hilarious event after another, LaMarr successfully summons the era's clash of ideologies with both wit and insight.

I hate to admit I don't do much fiction reading, but October Revolution made me realize what I have been missing. This romp is enjoyable for the lineup of always interesting characters as well as the historical content in which LaMarr places them.

A funny, sardonic debut from LaMarr … As comical as his present-day hijinks are, the  hilarious rendering of Huxley’s political past is even funnier….

It is a delight and, what's more, it has a great opening sentence: "The FBI is watching my cats."

THE FBI IS WATCHING MY CATS. It's part of the deal we made. Three Denver-based agents were assigned this task, or 1.5 per cat. Fenwick saved me for himself.